Home » In the News 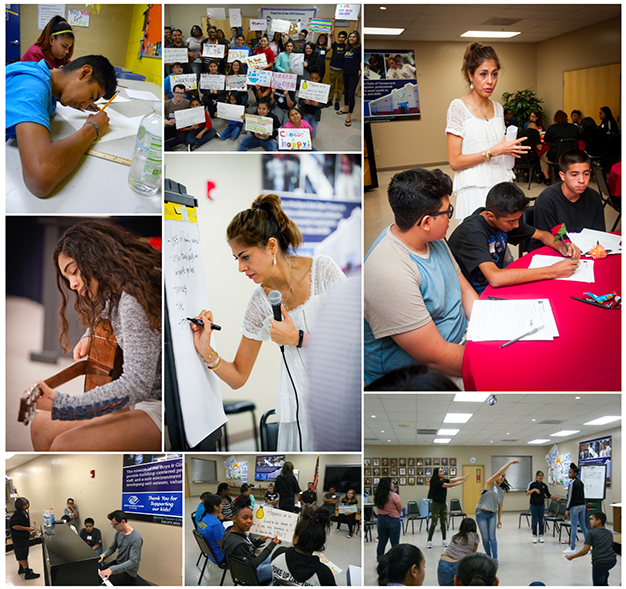 (Tucson, Arizona) – Boys & Girls Clubs of Tucson (BGCT), a Tucson-based nonprofit that provides enriching after-school and summer programs, professional staff, and a safe environment for young people at six local Clubhouses, is excited to announce that The Canales Project’s Finding Your Voice Program will return to Tucson for an expanded second year. The enhanced Program will include not only intensive workshops during the fall and spring with world-renowned opera singer Carla Dirlikov Canales, but also the creation of a dedicated staff position to increase Club members’ exposure to the arts year-round. The Program funders are long-time generous supporters of the Clubs, Linda and Stuart Nelson of New York City and Tucson.

Carla Dirlikov Canales, award winning mezzo-soprano and founder of The Canales Project’s Finding Your Voice Program, designed the initiative to help young people focus on self-discovery, cultural celebration, and the role that the arts can play in finding one’s identity. Building on last year’s successful launch at BGCT, new participants will be invited to create and present a unique performance about their identity, cultural heritage, and traditions. Program activities will incorporate self-reflection, cultural discovery, storytelling, and voice training in order to prompt participants to explore their identities and define ways they can raise their voices to create stronger bonds among diverse communities. The Canales Project team will be returning to Tucson to lead the fall intensive workshop from October 10-13, 2017.

“Who could have guessed that the launch of The Canales Project’s Finding Your Voice Program would occur at a moment in time when young people across Tucson needed support with shoring up and deepening their pride in their identities more than ever. The partnership with BGCT was born when we introduced our daughter Laurie and Carla to each other, two very determined peas in a pod when it comes to changing lives. Together with Debbie Wagner and the incredibly outstanding staff of BGCT, they have made it possible for Carla’s message of compassion and inherent sense of joy and hope to reach young people who need it most.” – Linda and Stuart Nelson

“We are all so grateful to BGCT and to the Nelsons for giving TCP the opportunity to return to Tucson and reunite with this special group of young adults. I am very proud of what we accomplished in the inaugural year of the program, and I am very excited about what we have planned for this year now that we have come to better know the group and can build on what we started!” – Carla Dilrikov Canales

“We are delighted to be expanding the Finding Your Voice program to increase our Club members’ exposure to the arts and artists in our community. I was honored to witness the power and impact of this program first hand last year. Participants overcame shyness, developed performance skills, and voiced their unique perspectives about their lives and cultures through music, dance, and artwork. We are so grateful to the Nelsons and Ms. Canales for continuing to provide and expand this incredible learning opportunity at BGCT.” – Debbie Wagner

About The Canales Project

Carla Dirlikov Canales is an award-winning mezzo-soprano known not only for her achievements as a singer but also for her work as a thought leader and advocate.

Carla has been praised by Opera Magazine for possessing a voice that “grabs the heartstrings with its dramatic force and musicality.” She has appeared at Avery Fisher Hall, Carnegie Hall, the Kennedy Center, Italy’s Spoleto Festival, Glynebourne Opera, Opéra Royal de Wallonie, China’s National Center for the Performing Arts in Beijing, and Guangzhou Opera House, among many others. She was a featured performer in a presentation of the Messiah by the Street Symphony in Los Angeles that was cited by Alex Ross in The New Yorker as one of the ten most notable performances and recordings of 2015. She performed in the UNAM Anniversary Concert, which was nationally televised in Mexico, and on the Hispanic Heritage Awards, which was nationally televised in the United States. She was the guest artist for Vice President Biden’s Hispanic Heritage Month Reception and performed at the National Endowment for the Arts’ 50th Anniversary Celebration.

The proud daughter of a Bulgarian father and a Mexican mother, Carla has worked to create and improve international connections through the arts and culture, and has been a guest speaker and performer around the world outside of traditional concert venues. Carla founded The Canales Project, a not-for-profit organization specializing in giving voice to issues of identity and culture through music and conversation. For her advocacy work with youth for over a decade, the U.S. State Department recently conferred upon her the title of Cultural Envoy. Carla is the first opera singer to be named by Foreign Policy Magazine to its prestigious annual listing of the year’s 100 Leading Global Thinkers, and the first to be named to the roster of the President’s Committee for the Arts and the Humanities’ Turnaround Arts initiative. She was also recently appointed to the Artists Committee of the Americans for the Arts and is a board member of the Artful Learning model, established by Leonard Bernstein and operated under the aegis of the Bernstein Family Foundation. In 2014, she became the first singer ever to win the prestigious Sphinx Medal of Excellence, an honor bestowed upon her by Justice Sonia Sotomayor in a ceremony and concert at the Supreme Court of the United States. Carla has been selected by the Government of China as one of its 1000 Talents and as such will partner as a guest soloist with the China National Symphony Orchestra from 2018-2021. She is also the Artistic Director of the programming for the CultureSummit Abu Dhabi.

The Canales Project (TCP) was created to give voice to issues of identity and culture through the arts and conversation. It is TCP’s aim to explore stories of “the other” in society and to lead audiences on a journey from “the other to the all,” seeking the connections that enable healing and a celebration of what we have in common. TCP’s concert series, BETWEEN TWO WORLDS, will explore these ideas via music and interaction with artists who also understand the cultural divisions that threaten our society today. The name “Between Two Worlds” is taken from the autobiography of U.S. Supreme Court Justice Sonia Sotomayor and frames the challenges that she, like so many others have faced whose backgrounds or home lives or beliefs often have the effect of separating them from society at large.

TCP is deeply committed to educational programming, as well as concert programming, with the mission of empowering youth. The group also will develop programs associated with cultural diplomacy—using the arts to help bridge the gaps that exist between nations and societies on the international stage today. http://thecanalesproject.com

About The Boys & Girls Clubs of Tucson

For more than 50 years, the Boys and Girls Clubs of Tucson has helped kids, especially those who need us most, build a great future. Boys and Girls Clubs of Tucson provides affordable alternatives and after-school programming to more than 4,000 Club Members across Tucson annually at its six local Clubhouses and reaches thousands more young people through community outreach activities and programs. Using proven youth development approaches and strategies, BGCT equips young people to pursue pathways to success and, as a result, they have the resilience and support to face challenges and seek solutions. Membership is only $10 per school year, while the true cost to the organization is $700 annually per member. No child is ever turned away due to his/her inability to pay.  BGCT is a trusted partner in empowering children and is a leading Tucson charity. For more information about volunteering or contributing to the Boys & Girls Clubs of Tucson, visit www.bgctucson.org or call (520) 573-3533.